SMD started an exploration drift (originally known as Vista) at Twin Creeks in 2011. After a short period of underground drilling, we continued exploration drifting in 2012 and 2013. We completed some test stoping in 2016 and Newmont reached a production decision in 2017. We mobilized in July 2017 to advance development and begin production mining. 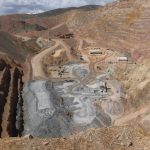